For readers of Sara Donati and Diana Gabaldon, this epic historical romance tells of fateful love between an indentured Scotsman and a daughter of the 18th-century colonial south.

When captured rebel Scotsman Alex MacKinnon is granted the king’s mercy–exile to the Colony of North Carolina–he’s indentured to Englishman Edmund Carey as a blacksmith. Against his will, Alex is drawn into the struggles of Carey’s slaves–and those of his stepdaughter, Joanna Carey. A mistress with a servant’s heart, Joanna is expected to wed her father’s overseer, Phineas Reeves, but finds herself drawn instead to the new blacksmith. As their unlikely relationship deepens, successive tragedies strike the Careys. When blame falls unfairly upon Alex he flees to the distant mountains where he encounters Reverend Pauling, itinerate preacher and friend of the Careys, now a prisoner of the Cherokees. Haunted by his abandoning of Joanna, Alex tries to settle into life with the Cherokees, until circumstances thwart yet another attempt to forge his freedom and he’s faced with the choice that’s long hounded him: continue down his rebellious path or embrace the faith of a man like Pauling, whose freedom in Christ no man can steal. But the price of such mercy is total surrender, and perhaps Alex’s very life.

Lori Benton is an unknown author to me before now. Now I know why she is a favorite of many, and her new book, The King’s Mercy, is so greatly anticipated. Scheduled for release on June 4, (2019), I obtained an ARC through Waterbrook-Multnomah, the publisher. Ah, Benton had me at the double entendre title. How I love these. Obviously, we are talking about the mercy of two very different kings. Captured at the Scottish battle of Culloden, Alex McKinnon is spared death three times before he receives the true “king’s mercy,” banishment to the colonies as an indentured slave. I was impressed by how scornfully the phrase “the king’s mercy” was uttered by those who were unfortunate enough to receive it. Just a day after I finished this wonderful book, I encountered this telling verse in Proverbs 12:10: “Whoever is righteous has regard for the life of his beast, but the mercy of the wicked is cruel.” (ESV) So we have established there is a lot of emotion-anger. There is also love, confusion, subterfuge, greed, avarice, helplessness, and an intense longing for freedom. As I reminisce about this sweeping saga, I am tempted to divide people into two groups: slave and free. Interestingly enough, the groups are not iron-clad, and it might be surprising who could land in each category. Who is really enslaved, and who is truly free? So many characters to like, some to love, others to despise. My favorite character is Alex. He is sensitive, humble, and empathetic to the pain of others’, be it Joanna’s loss of a friendship years ago; Elijah’s inability to work the smithy following his accident; or Jemma’s inability to fit in where expected. He still had a few flaws, but wouldn’t we all like to hear this: “…I don’t think it right or true that you be defined by a single choice.” And the quotes. Benton speaks well to present-day. “Ye’ve always had that about ye, a need for a purpose beyond yourself. ‘Tis the Almighty knit ye so.” We are all made in God’s image, with a purpose beyond just living for ourselves. When all seemed bad enough to drive one to insanity: “So be the iron. Bend with the heat.” “Despite her best intentions, she was playing the part of Martha again when she longed to be Mary, sitting at the preacher’s feet.”  “If ye draw lines between yourself and folk, the least ye can do is keep to your side of them.” “…it was her very life that vexed her, its burdens, its injustices. She wanted freedom as badly as he.” 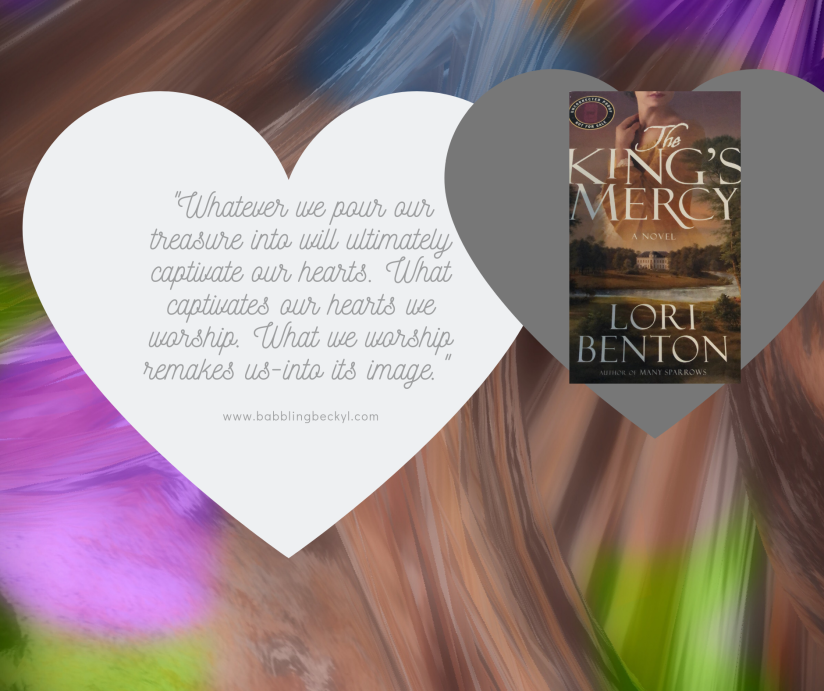 “Whatever we pour our treasure into will ultimately captivate our hearts. What captivates our hearts we worship. What we worship remakes us— into its image.”  One issue I had is that historicals that mention several real places should always have maps. How frustrating to have locations referred to repeatedly, but have no idea where they really are. I found Cape Fear on a map; other locations I could only wonder. Finally, I liked very much the author’s note of explanation concerning the fact the story is loosely based on Biblical characters. Where truth and fiction collided, I found the characters true to Scripture. Well-done, Lori Benton!! I received a complimentary copy of this book from Waterbrook-Multnomah. No positive review was required and all opinions are my own. 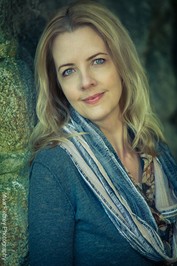 Lori Benton was born and raised east of the Appalachian Mountains, surrounded by early American and family history going back to the 1600s. Her novels transport readers to the 18th century, where she brings to life the Colonial and early Federal periods of American history, creating a melting pot of characters drawn from both sides of a turbulent and shifting frontier, brought together in the bonds of God’s transforming grace.

When she isn’t writing, reading, or researching 18th-century history, Lori enjoys exploring the mountains with her husband.

Burning Sky, Lori’s debut novel, was a finalist for the ECPA 2014 Christian Book Award, and winner of the 2014 Christy Award for First Novel, Historical, and Book of the Year.