It started with one little lie. But Jane Hardy will do everything in her power to uncover the truth in this gripping new romantic suspense.

Jane Hardy is appointed interim sheriff in Pelican Harbor, Alabama after her father retires, but there’s no time for an adjustment period. When her father is arrested for theft and then implicated in a recent murder, Jane quickly realizes she’s facing someone out to destroy the only family she has.

After escaping with her father from a cult fifteen years ago, Jane has searched relentlessly for her mother—who refused to leave—ever since. Could someone from that horrible past have found them?

Reid Bechtol is well-known for his documentaries, and his latest project involves covering Jane’s career. Jane has little interest in the attention, but the committee who appointed her loves the idea of the publicity.

Jane finds herself depending on Reid’s calm manner as he follows her around filming, and they begin working together to clear her father. But Reid has his own secrets from the past, and the gulf between them may be impossible to cross—especially once her father’s lie catches up with him.

5 Stars – Superior – Hits My Reading Sweet Spot (If only we didn’t have to wait for the ending!)  😦

A green police chief, vigilante justice, and a town full of secrets. Mixing these together with Colleen Coble’s compelling suspense and a dollop of romance brings you One Little Lie, a “most excellent” police adventure.
I really loved the storyline and most of the characters. The jury is still out on a few of them, namely the mayor, whom I’m trying to figure out. I did enjoy Jane Hardy and Reid and Will Dixon. Will sounds like one very neat teenager. Jane and Reid work together well. I have to wonder about how involved Reid was in the cases, as a civilian. Yet, my mind argues back that real life can be hard to separate into separate columns, and this just solidifies that point. 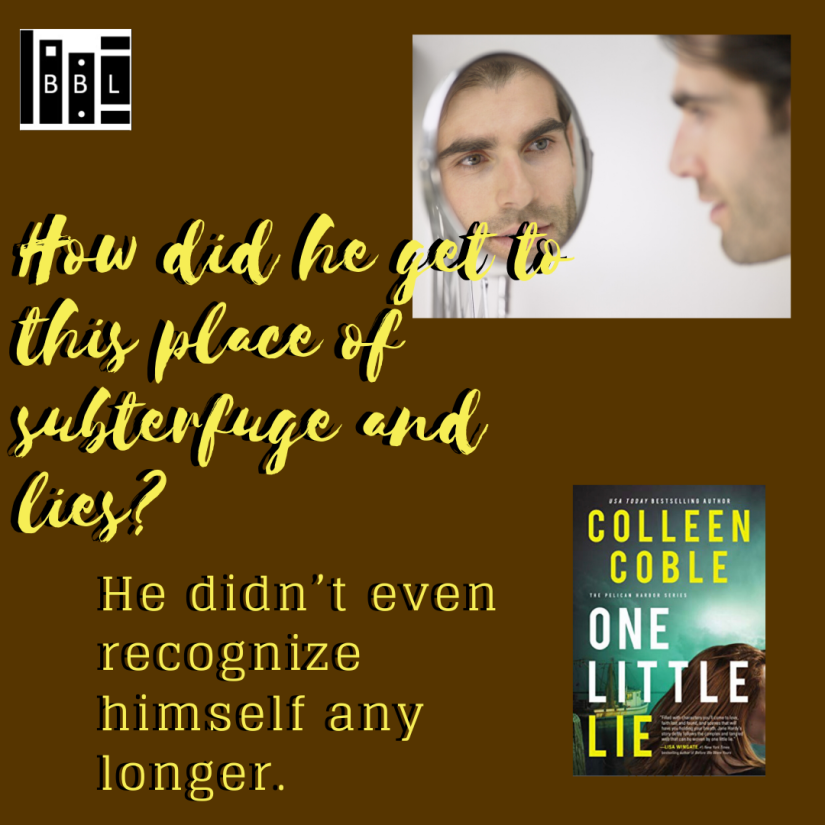 The bay seems to be a little murky and so are so many of the relationships in this faith-filled novel. We see true friendship, bad parenting, misguided parenting, great parenting, and arms that lost the child they should have parented. I can just imagine Jane, if she had a theme song, singing “Lies,” from Jonathan Butler eons ago. The question is, who would she be singing it about? Faith, love, forgiveness, deceit, and revenge all surface in Pelican Harbor. Unfortunately for us, the readers, a neat ending does not. I appreciated Coble’s note that explained her reasoning. I appreciated that we had a “soft” ending, with more to come in the next Pelican Harbor installment ( Two Reasons to Run, coming September 2020), rather than a rushed, messy ending. Definitely a book to pick up, but preferably during daylight hours, with plenty of safe people around.

I received a complimentary copy of this book from the author and publisher through Celebrate Lit via NetGalley. This does not affect my opinions, which are solely my own.

Best-selling author Colleen Coble’s novels have won or finaled in awards ranging from the Best Books of Indiana, the ACFW Carol Award, the Romance Writers of America RITA, the Holt Medallion, the Daphne du Maurier, National Readers’ Choice, and the Booksellers Best. She has over 2 million books in print and writes romantic mysteries because she loves to see justice prevail. Colleen is CEO of American Christian Fiction Writers. She lives with her husband Dave in Indiana. You can visit her website at http://colleencoble.com.

Through the Fire Blogs, March 12

For Him and My Family, March 16

For the Love of Literature, March 19

Because I said so – and other adventures in Parenting, March 19

Spoken from the Heart, March 22

To Everything There is a Season, March 23

Lights in a Dark World, March 23

*No Giveaway for this Celebration Tour