A sweeping, epic retelling of the story of the Tower of Babel. . .

More than a century after the worldwide flood, Noah, now the forefather of the living world, works peacefully in his vineyard until tragedy tears apart his relationship with his son, Ham.

Years later, dark prophetic dreams inextricably link him with a young man carrying scars from a painful past, and a young woman who longs for acceptance yet harbor secrets darker than either of them imagine.

Will Noah face the role he played in the slow unraveling of his family? Or will everything collapse when they meet the evil attempting to swallow the world at. . . the Tower of Babel?

Wow! Powerful, eye-opening, electrifying. Babel, by Brennan McPherson, is the presentation of a world wiped clean by the Flood, only to quickly degenerate into a nefarious world leading up to the demise of that great Tower. Pulled in by Noah’s sorrow, quickly followed by Canaan’s curse, I couldn’t believe the paths the characters were forging. Choices made had staggering consequences, as even Noah discovered. I stayed up late to finish Babel to avoid bad dreams. This was not the book I wanted to start the New Year with, but I am so glad I did. Certainly, my reading year started with a bang!

Brennan McPherson has created a thought-provoking novel that stays true to what we know of Scripture and yet fills in what could have been. His words answer the “why’s” and the “how’s” of those early Genesis chapters. While McPherson believes his theories plausible, he is quick to explain his thinking and admit this is one idea of how things happened. Those that love Frank Peretti’s This Present Darkness or the nonfiction books by Michael Heisler that speak of “lesser gods” will enjoy the underlying spiritual warfare.
Some themes are even the best are sinful, and that filters down and grows malignantly; wickedness tries desperately to hide or annihilate the Light, and God’s mercy can forgive even indescribable wickedness. We are all responsible to/for the world around us. There was at least one more very heavy-hitting theme that I thought was overdone. Reading the author’s note at the end helped me understand why. 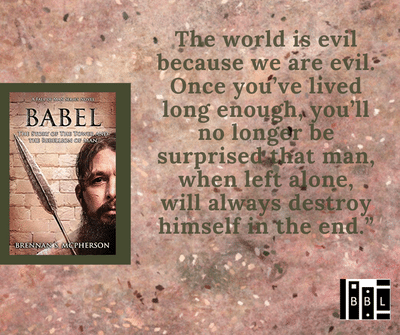 What an amazing Biblical fiction novel that will leave you petrified, yet hopeful and secure in God’s unfailing love!
I received a complimentary copy of this book from the author through Celebrate Lit. This in no way affects my opinions, which are solely my own.

5 Stars- This novel certainly hit my reading Sweet Spot and stoked my imagination and thinking. 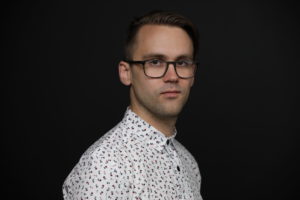 BRENNAN S. MCPHERSON writes epic, imaginative biblical fiction with heart-pounding plots and lyrical prose, for readers who like to think biblically and feel deeply. He lives with his wife and young daughter in the Midwest and spends as much of his spare time with them as possible. Find out more about him at brennanmcpherson.com.

When I first heard the story of the Tower of Babel as a kid, it was hard for me to take it seriously. A guy named Nimrod builds a tower that he thinks is going to reach to the heavens (what a nimrod) and God punishes him? That’s pretty humorous sounding.

But is that really the whole story?

Upon closer look, we see that’s not quite what happened! And neither is the story any laughing matter. So, let’s dive through 10 facts you might not know about the story of the Tower of Babel in the book of Genesis:

Before working on the full-length novelization of the story of the Tower of Babel (BABEL: The Story of the Tower and the Rebellion of Mankind), I didn’t know any of this. This is part of the reason why I love writing biblical fiction. It drives me back to the text of the Bible in a way nothing else does. I hope reading it does the same for you! Blessings, and thanks for reading. And if you want to pick up a copy of the book, you can do so now on Amazon or Audible.

For the Love of Literature, January 7

Through the Fire Blogs, January 8

To celebrate his tour, Brennan is giving away a McPherson Publishing Bundle, which includes paperback copies of Flood, Eden, the Psalm Series, and The Simple Gospel!!