Strong-willed Tirzah wants to join her people in driving the enemy from the land of Israel and undergoes training for a secret mission inside the stronghold of Shechem. But soon after she has infiltrated the ruthless Aramean commander’s kitchen, she makes a reckless decision that puts her and her allies in grave danger.

Fresh off the battlefield, Liyam returns home to discover his beloved daughter is dead. After his vow to hunt down her killer leads to months of fruitless pursuit, his last hope is in a family connection that comes with strings attached. Strings that force him to pose as a mercenary and rescue an infuriating woman who refuses to leave her mission uncompleted.

When an opportunity to pave a path to a Hebrew victory arises, can Tirzah convince Liyam to fight alongside her in the refuge city of her birth? Or will Liyam’s thirst for vengeance outweigh his duty to his people, his God, and the woman he’s come to love?

Connilynn Cossette consistently brings us novels of Biblical times that draw the readers in and make us believe that we are part of the ancient world she has flung open like a door. Like Flames in the Night is a tale of the nation of Israel as it is terrorized by the cruel Arameans, with Othniel leading the resistance. More specifically, we meet brave, bold Tirzah, who yearns to do her part to free the Hebrew people. Liyam is a warrior who loses his faith when he loses his dearest possessions. Somehow these two are key players in Israel’s struggle to be free.

Tirzah is a highly relatable character because she has several brothers and is very comfortable competing against them. Many female readers will either relate to the idea of competing with brothers or just wanting their contributions to be as valued as men’s. Some may say that women leaders were unheard of in Israeli history, but we can easily recall names of heroines such as Miriam, Deborah the judge, or Esther. I love how Tirzah slowly recognizes that Yahweh Himself has spoken through her outspoken personality. God uses us as we are.

Ah, Liyam. Heartthrob, spy, blood-avenger. He looks so good in his protective role, one might actually think he can let go of his blood-lust. What a tension this creates as Tirzah’s family tells their own history, and multiple friends urge the angry Hebrew to pursue life, not death. But is that even possible for Liyam?

I almost forgot Odeleya. She will worm her way into your heart and find a permanent spot.

If you like Biblical fiction, you need to add this last book in Cities of Refuge series to your collection. You could read this book as a stand-alone, but the series is too great. You will want to read all four books in Connilynn Cossette’s series.

So many “notable quotables.” I will keep them to just a few.

“Has Yahweh disappeared? Or has the power that split the sea diminished since the Arameans took control? Or have we simply forgotten who we are?” 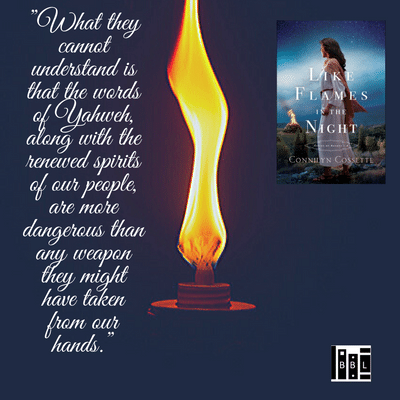 “…where the black shadow of Har Ebal stood, and at its peak, the altar of Yehoshua.  “A fire will burn there again soon. And when it does, be assured that it was your iron strike against our flint hearts that created the first spark.”

“But it is our duty as men consecrated by Adonai Most High to speak truth. We have hidden too long in our homes, cowering, keeping His Words locked in our hearts instead of on our tongues.”

“If the people of Yahweh rise up and remember who they are, nothing will stop our armies from being victorious over the Arameans this time. Nothing.”

“Who was I to speak to the mind of the Eternal One? Or to turn my face away from the gifts he’d given me?  Perhaps even the trials I had endured were gifts in a way, making me stronger, wiser, more prepared to accomplish his purposes.”

“Justice without mercy was tyranny, and mercy without justice was lawlessness.”

I received a complimentary copy of this book from Bethany House and the author. This in no way influenced my opinions, which I am voluntarily leaving. I am solely responsible for these opinions. 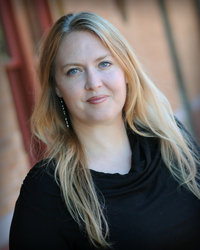 Connilyn Cossette is the Carol Award Winning and ECPA Bestselling author of the Out from Egypt Series and the Cities of Refuge Series from Bethany House Publishers. When she’s not engulfed in the happy chaos of homeschooling two teenagers, devouring books whole, or avoiding housework, she can be found digging into the rich ancient world of the Bible. She delights in discovering new gems of grace that point to Jesus and weaving them into an immersive fiction experience. Connect with her at www.ConnilynCossette.com