Lucy Clairmont’s family treasured the magic of the past, and her childhood fascination with stories of the high seas led her to become a marine archaeologist. But when tragedy strikes, it’s Dashel, an American forensic astronomer, and his knowledge of the stars that may help her unearth the truth behind the puzzle she’s discovered in her family home.

Two hundred years earlier, the seeds of love are sown between a boy and a girl who spend their days playing in a secret sea cave, while the privileged young son of the estate looks on, wishing to join. As the children grow and war leads to unthinkable heartbreak, a story of love, betrayal, sacrifice, and redemption unfolds, held secret by the passage of time.

As Lucy and Dash journey to a mysterious old estate on the East Sussex coast, their search leads them to a community of souls and a long-hidden tale that may hold the answers–and the healing–they so desperately seek.

Set the Stars Alight by Amanda Dykes is a book that I had to get my hands on. I hope you will want to, also. This is a realistic story, yet stirred into it are the timeless allure of magical inklings, coupled with family ties swelling and shrinking. Love slowly takes root and blossoms, yet is carefully guarded until the right time. And the wondrous fact is, that this is actually true of both subplots of this amazing novel, which comprise this split-time tale.
One portion of our adventure concerns Lucy, born to a clockmaker in London in recent times. Lucy’s warm, welcoming family time is built around tales spun by her enigmatic father and amended by her jovial mother. Dash, a young misfit, American boy, is welcomed into their familial atmosphere. Suddenly, life flips and flops, and Lucy finds herself alone and floundering with only her marine interest to keep her afloat.
The second saga is a melodrama about a young son of a military hero in the war against Napoleon. Frederick tries hard to make his father proud, but loyalty and fate interfere.

Split-time stories depend upon the author’s fantastic ability to draw two separate, believable strands, at first totally disparate paths, then cause them to become parallel roads, then bring those parallel roads into an obvious intersection where the highways then become one. I had trouble suspending disbelief at some points. I wanted more communication in others. Some issues dragged on too long between people because of a fear of communication that I didn’t find realistic.
So, I thought this was a great book, but it stopped short of the terrific level of Ms. Dykes’s debut novel. Still a very worthy read. Get ahold of Set the Stars Alight and judge for yourself.
I received a complimentary copy of this book from Bethany House and NetGalley. This in no way affects my opinions, which are solely my own.
Notable Quotables:

“When things seem dark…that’s when you fight for the light.”

“But it started with smaller things, which bigger things built on again and again until the big betrayal no longer felt like a plunge to him. It was a small—almost natural—next step.”

“‘Impossible?’…The word had been gifted to them all their lives as a challenge. A lens to see wonder where others saw walls.”

Amanda Dykes is the author of Bespoke: A Tiny Christmas Tale, the critically-acclaimed bicycle story that invited readers together to fund bicycles for missionaries in Asia. A former English teacher, she has a soft spot for classic literature and happy endings. She is a drinker of tea, a dweller of Truth, and a spinner of hope-filled tales, grateful for the grace of a God who loves extravagantly.

TITLE: Whose Waves These Are

In the wake of WWII, a grieving fisherman submits a poem to a local newspaper asking readers to send rocks in honor of loved ones to create something life-giving but the building halts when tragedy strikes. Decades later, Annie returns to the coastal Maine town where stone ruins spark her curiosity and her search for answers faces a battle against time.

“Every wave in that big old blue sea is a story.” With these words, young Annie’s great-uncle finds a way to unlock some of her fears and turn them into something beautiful. But when she returns to Ansel-by-the-Sea as an adult, will she have the key she needs to unlock her adult fears and turn them to confident love and purpose?
Amanda Dykes may be a name I had never heard before, but by penning Whose Waves These Are she is rapidly garnering attention in the Christian fiction world. I predict this novel will win an award for a debut novel in 2019.
A time-slip book, the reader is tossed like the sea between young Annie as she grows up, a mature Annie of the present, and a young Robert Bliss whose twin is drafted in 1944.
Annie is a great heroine. One can’t help but root for her as she returns to look for her great-uncle. Will she grow enough to fit in and find her place in this seashore town? The pieces to this puzzle are more numerous than I expected and definitely include Annie’s parents. A story like this, told chronologically, would have been interesting. By creating a time-slip out of it, and adding the unexpected twists, Dykes produces a work nothing short of amazing!
Some favorite quotes:
The first and most important to me-
“Life is big. And God is bigger.”
“You’re a good man. Let me try to be one, too.”
“He wasn’t the oldest, but they both knew he was the one who had the fury of a nor’easter inside him, a fury he could use to fight.”
“She imagines people as combination locks, each bit of information a tick on the dial as she works to build up their story in her mind, to unlock them.” 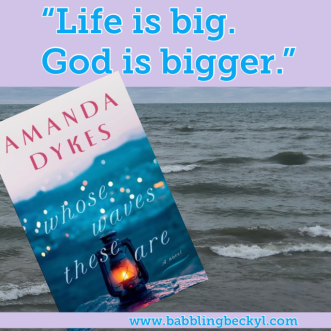 “…if everything around you is broken, it’s time to unbreak something.”
When Annie is trying to figure out her purpose:
“‘The microbes,’ he says, ‘only have a single cell. And they use it to capture sunlight all day— their sole purpose. At night, when danger comes, …they don’t run. They don’t shrivel up or hide. They release the sunlight they’ve been storing up, right into the darkness. They fight it back by lighting up.’”
Expect a small town, big hearts, sweet romances, tragedy, and miracles. Expect a blessing in this book.
I received a complimentary copy of this book from the publisher via NetGalley. This in no way affects my opinions, which are solely my own. 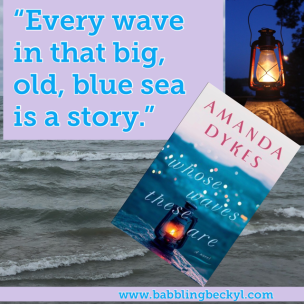 Amanda Dykes is the author of Bespoke: A Tiny Christmas Tale, the critically-acclaimed bicycle story that invited readers together to fund bicycles for missionaries in Asia. A former English teacher, she has a soft spot for classic literature and happy endings. She is a drinker of tea, a dweller of Truth, and a spinner of hope-filled tales, grateful for the grace of a God who loves extravagantly.