“You want me to tell of how I broke the world.”

When Enoch, God’s newly appointed prophet, decides to collect the stories of the faithful from previous generations, he finds Adam in desperate need to

confess the dark secrets he’s held onto for too long.

Beside a slowly burning bonfire in the dead of night, Adam tells his story in searing detail. From the beginning of everything, to how he broke the world, shattered Eve’s heart, and watched his family crumble.

Will Enoch uncover what led so many of Adam’s children away from God? And will Adam find the redemption and forgiveness he longs for?

When Eden by Brennan McPherson was offered through Celebrate Lit, I was excited. I had read his Babel, #3 The Fall of Man, and loved it. Eden is book one in that series. I am not so much a fan of this book. “Man’s pervasive fallenness compared with God’s incredible mercy” is McPherson’s stated theme. I could relate to man’s incredible fallenness, though I felt it was heavy and dark. I could not see so much of the incredible grace of God.
Eden includes some action but is in a large part a book of attitudes and memories. It’s the sad tale of Adam and Eve, after creation, sinning and losing their place of fellowship with the Father. Not only is life now cursed, but Adam spends much of his life trying to win Eve’s love. Eden gives the impression Adam can only have God’s love or Eve’s following the fall. Eve alternately loves Adam or is angry and bitter at Adam. Then Adam withdraws, hurting Eve, and the cycle repeats as Eve falls away from not only a relationship with Adam but her original trust in God. I found there was way too much emphasis on the discord between Adam and Eve. It was difficult to read, as Eve seemed very evil and cruel, but yet the Father holds Adam responsible for her behavior. Once again, as I read the notes at the end, I began to understand why McPherson wrote this way, but I feel God ultimately holds each person responsible for his/her own sin. Also, “God” seems to demand unreasonable obedience, as in the First “Day of Atonement.” God may ask us to do the hard, seemingly impossible, but He understands our human limitations. God’s supposed demands on Eve that day do not show the God of either the New or the Old Testament Law concerning birth. I think it would be fair to say I am very uncomfortable with making God a “character” in Biblical fiction. 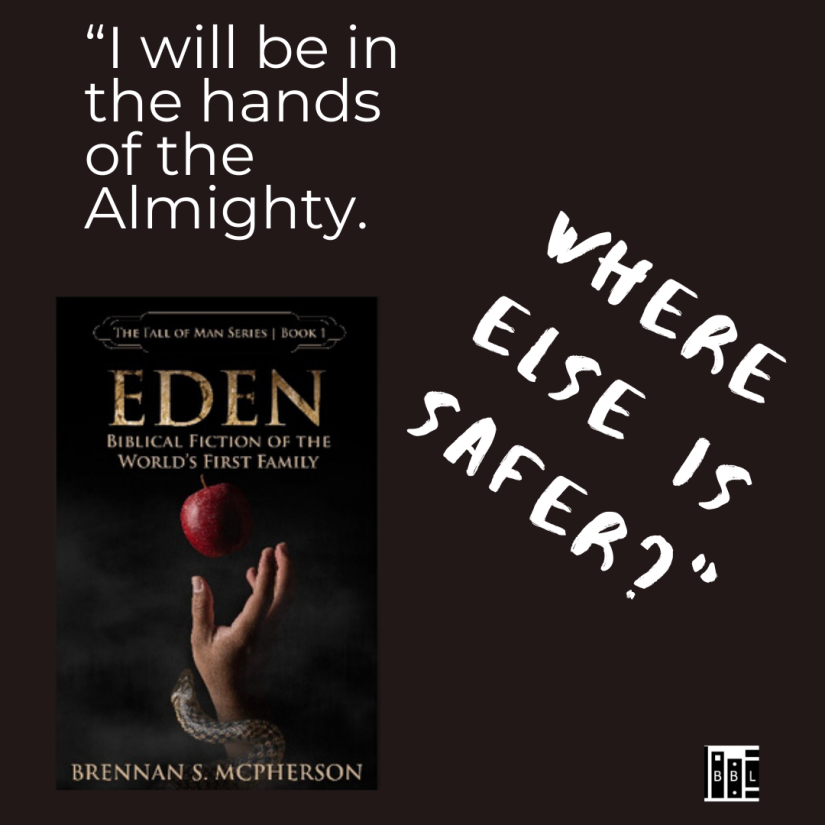 Again, when Cain and Abel bring their differing sacrifices to the Father, some will, like me, have difficulty with the reason McPherson gives as to why God was unhappy with Cain’s sacrifice. I agree it had to do with pride. However, God made it clear sins could only be atoned for by a blood sacrifice. So, the fruit of the earth as a sacrifice? One other thing I must mention. McPherson, in his notes, admits to including some fantasy. In my thinking, fantasy has no part in Biblical fiction. 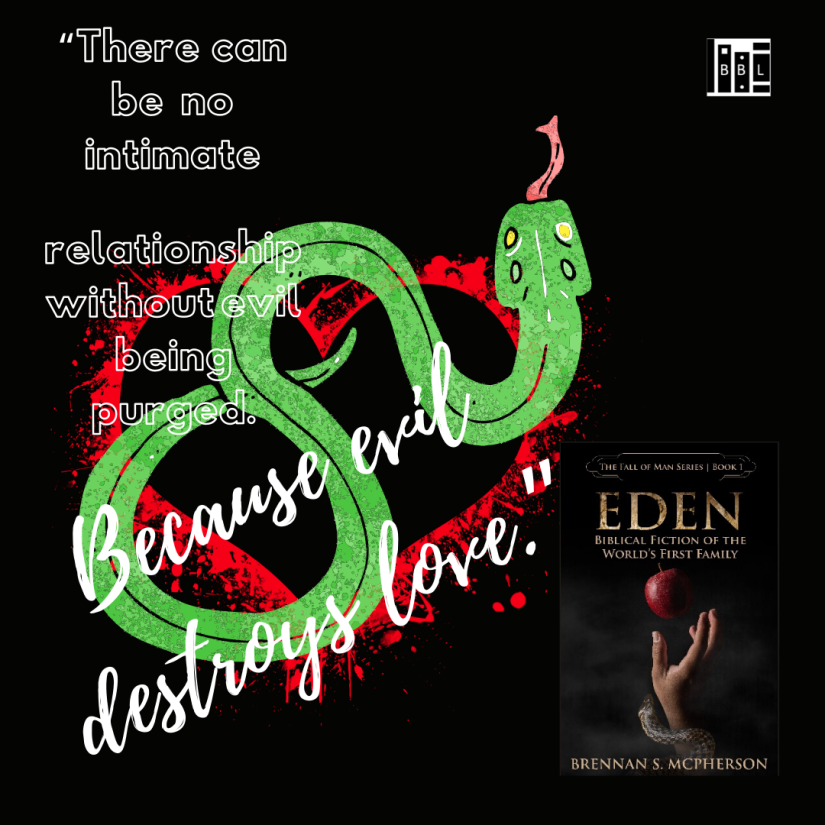 The notes at the end actually caused me to pause and think. I looked up the birth of Cain and Abel in several versions. Is it possible they were twins? With the textual notes McPherson added, I would have to say that’s not impossible, although not what I’ve been taught.
I also understood better why he wrote as he did. I wish he would have had footnotes to refer the reader to his notes. I could have read with a more understanding heart.
Many people may not be bothered by the examples I’ve mentioned. This book may also be for you if you enjoyed The Shack.
I received a complimentary copy of this book from the publisher through Celebrate Lit. This in no way influenced my opinions, for which I am solely responsible.

3 Stars- Good; I Liked it, but would not necessarily recommend it.

I do think it could be an interesting book club pick if readers know they are in for some controversy as they discuss it.

BRENNAN S. MCPHERSON writes epic, imaginative biblical fiction with heart-pounding plots and lyrical prose, for readers who like to think biblically and feel deeply. He lives with his wife and young daughter in the Midwest and spends as much of his spare time with them as possible.

In my beginning was not darkness, but Light.

As I opened my eyes for the first time, I saw dust motes swirling around five bright points. I reached for them and realized the dust was not blowing past me but instead settling across the complex shapes in my arms.

Distracted, I twisted my wrist, seeing muscle, tendon, bone, and a partial layer of skin. Clenching my fingers one by one, I saw the movement in my joints.

Fascinated, I watched as a swathe of dust poured over me like a sheet of silk and morphed into smooth, brown flesh. I ran my fingers across my new skin, and when the sound of shifting sand settled, noticed what sounded like gentle Music riding on the breath that flowed into me.

“Adam,” I said, for I had heard that name—my name—in the Music.

I realized that my Father was singing over me, and in his singing, he had given me life and form, and had named me Adam.

He smiled at me, with those dark brown eyes, and let soft melodies fall from his tongue as I lay on my back.

He lifted me from the mud and burned the remaining dust from my skin with the heat of his presence. But he did not hurt me as a natural flame might. Instead, he filled and cleansed me. And the joy of him filled me with an insatiable desire to experience everything around me, to understand the world he had sung into existence.

I’ve never since felt so whole as I did with him in Eden. Because inside me was nothing that did not belong. Only him, and the breath he gave, and the Music he sang, and the smells of Eden, and the touch of his Light, and the taste of his name on my lips as I spoke for the second time. “Father.” I smiled and laughed.

He stood magnificent, warm, compassionate. The image of the invisible condensed in a life foreknown before the foundations of the world were formed.

I felt his pride over me and laughed again, only now with tears.

My first moments were not like those of a newborn child come from a womb. Instead, they were of a child gone into the womb. Swaddled in the Light of God. Cocooned in his satisfaction.

I was Adam. Man fully formed. Reflection of perfection.

In joy, I fell to my hands and knees and bowed my forehead to the ground. Tears flowed to the soil I’d been formed from. How great! How wonderful this being was who had made me for himself, and who so unendingly satisfied me. Nothing I’ve experienced in my long years could ever make me forget it. That sense of purpose. Of everything being right.

Ah, yes. I see wonder on your face, Enoch, at how tears could be present in a world yet unbroken by sin.

Have you never wondered why the kiss of a lover can bring tears to our eyes? It is because some goods are so great that they must be given vent. For not all tears spring from sorrow. And not all aches are unwanted.

Yet still, my Father lifted me and wiped my cheeks. Then he led me across hills and valleys, puddles and rivers. He pointed at plants and skittering animals and insects, and it seemed as though I could hear the echo of his melodies in their movements.

Through the Fire Blogs, April 6

For Him and My Family, April 8

For the Love of Literature, April 10

Lights in a Dark World, April 14

To celebrate his tour, Brennan is giving away the grand prize package of a “McPherson Publishing bundle”, which includes the following books: a copy of Flood, Babel, the three Psalm Series novellas, and The Simple Gospel book!!

I am a first and foremost a follower of Jesus Christ. Having formerly taught elementary school, I am now a special education para-pro. Our students are amazing! I am married with three great young adult children. My husband and I share our home with three rambunctious cats and a mighty chihuahua, plus two of our adult children. The house is full to bursting!!😊 View all posts by Babbling Becky L