The Toughest Puzzle She’ll Have to Solve 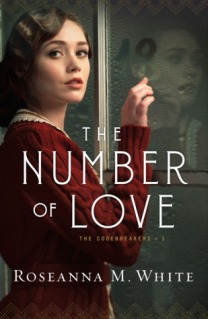 Three years into the Great War, England’s greatest asset is their intelligence network—field agents risking their lives to gather information, and codebreakers able to crack every German telegram. Margot De Wilde thrives in the environment of the secretive Room 40, where she spends her days deciphering intercepted messages. But when her world is turned upside down by an unexpected loss, she discovers for the first time in her life that numbers aren’t enough.

Drake Elton returns wounded from the field, followed by an enemy who just won’t give up. He’s smitten quickly by the intelligent Margot, but soon the dangers of the war draw ever closer. Margot and Drake will have to work together to save themselves from the very secrets that brought them together.

I am always amazed that authors can write stories about war that people like me will want to read. Yet Roseanna M. White has done just that, and admirably so, in The Number of Love. First, in The Codebreakers series, we are introduced to Margot de Wilde, a mathematical whiz who actually thinks and perceives all of life around her in numbers. I struggled some with this. First, it was way beyond my comfort zone. I can learn and even teach a bit of math, but I much prefer words. So even just reading that much about numbers was a little bit of a struggle, but thank goodness God gives everybody different strengths. What an interesting look into the battlefield that was played, not on land, but in minds, in ‘room 40’ in London. I also struggled with someone who saw herself as one of the most intelligent people on earth, next to God. Yes, God gave Margot and the other codebreakers an unusual gift, but I like to think others also have/had very unusual gifts, too. So I guess I felt like she thought a little highly of herself, which, coincidently, I would say, she was on her way to putting things back into perspective by the end of the book.
What I loved about the book was plentiful. There was lots of action. The reader gets to vicariously travel a bit. There are many different storylines going at once, giving a healthy vigor and breadth to the novel. Faith and kindness play huge roles in The Number of Love and actually lead to a remarkable ending.
What I really loved, though, was that Ms. White allowed her character to question God. She asked the tough questions. But it was the answer that she arrived at that I have either never heard, or it hit me afresh. So wonderful! I would suggest reading this book just to find out what her answer from God is. The romances are sweet; I enjoyed the tie-ins to characters from other books; the suspense was palpable; but the answers for life, we can use. Thank you, Ms. White.
I received a complimentary copy of the book from the publisher and Celebrate Lit through NetGalley. I was in no way influenced by this fact, and all opinions are my own.

Roseanna M. White is a bestselling, Christy Award-nominated author who has long

claimed that words are the air she breathes. When not writing fiction, she’s homeschooling her two kids, editing, designing book covers, and pretending her house will clean itself. Roseanna is the author of a slew of historical novels that span several continents and thousands of years. Spies and war and mayhem always seem to find their way into her books…to offset her real life, which is blessedly ordinary. You can learn more about her and her stories at www.RoseannaMWhite.com.

When I told my best friend and critique partner what book I was pitching next to my publisher, her response was something along the lines of, “That sounds awesome. Also, you’re crazy, and I do not envy you writing that one.”

I laughed…and knew exactly what she meant. Because I was setting out to write a heroine who was a mathematician—which I am definitely not. A heroine who was utterly indifferent to love and marriage—which makes for a difficult story when one writes romance. A character who had an unshakeable faith—which has to be shaken at least a bit in order to make for growth throughout the story. And more, a character who has “issues,” let’s call it, that those familiar with such things will recognize…and which those who aren’t will probably think are quirks.

I was setting out to write a story that would be challenging for me, every step of the way. And the result is a book I’m incredibly in love with and so happy to share with the world.

The Number of Love is all about Margot, who thinks and even prays in numbers. Born and raised in Belgium, she and her family fled to England in 1914 when the Germans invaded her homeland. Thanks to her remarkable abilities with numbers and patterns, she’s now employed at Room 40, the Admiralty’s secret codebreaking branch. But as I was contemplating what sort of man could ever win Margot’s heart, I knew he had to be very different… someone active where she’s still. Someone outgoing where she turns inward. Someone who sees in her what she never can, and who believes she can grasp the dreams that society tells her are unbefitting a woman. This is how Drake was born—a field agent employed by Room 40.

I can honestly say this is the only book I’ve ever written that required me to borrow my daughter’s algebra book while I was writing it, LOL. And though every single scene was a challenge, it was one I thoroughly enjoyed. I hope you’ll join me on the journey that Margot and Drake are on, which answer the question my husband cheekily asked more than once as I was writing it: what is the number of love?

Among the Reads, June 17

Reflections From My Bookshelves, June 19

For the Love of Literature, June 22

For Him and My Family, June 24

To celebrate her tour, Roseanna is giving away a grand prize of winner’s choice of TWO signed books, Fruit and Floral Flavors Sugar Shapes, and some Roseanna M. White swag!!

Be sure to comment on the blog stops for nine extra entries into the giveaway! Click the link below to enter. https://promosimple.com/ps/de86/the-number-of-love-celebration-tour-giveaway