Book: The Pages of Her Life 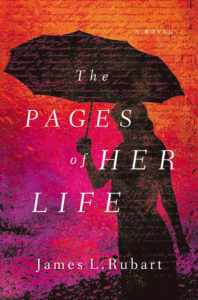 Award-winning and bestselling author James L. Rubart explores the way our memories shape us . . . and how they affect our beliefs.

Allison Moore has no idea why she got out of her car on that rainy March afternoon and picked up the soaked journal laying on the side of the road. Brought it home. But she did. It was empty. Except for two lines scrawled in the front, too washed out to read. And a Jesus emblem inside the back cover. Something about the journal compels her to start writing in it, capturing thoughts about her newly acquired job that she thought would be heaven, but has turned into hell. Then one day, she finds words in the center of the journal. Words she didn’t write: Mene mene tekel upharsin. After her heart stops hammering, Allison Googles the phrase, and reads the story of Belshazzar’s Feast, where a hand from God writes on the wall, and the king is slain. Fear grips her, certain God is coming after her for what she did twelve years back. What she’s done wrong her whole life. She vows to make things right. Then she discovers more phrases appearing underneath each of her journal entries. Those phrases take her on an emotional roller coaster that forces her to look at everything she believes about her past in a new light, and opens her eyes to a supernatural realm of staggering consequence.

“…secrets did not make for strong alliances.” And yet, in The Pages of Her Life, by James Rubart, we see a family thrown into a Twilight Zone setting by the death of the father and husband who kept unwelcome secrets. Allison, and her estranged brother, Parker, have difficulty in their lives as they try to escape the legacy of inadequacy their father bestowed upon them. An old journal and a stranger are about to shake up their lives forever.
This novel was a great reminder for me that not everything that seems to be of God really is. Certainly, some people claimed to love God in the book, but their actions proved just the opposite. They were their own gods. I wanted to cry with Allison as she begins to figure this out. It is easy to relate with her and her brother, as all the outer trimmings are stripped away and each is forced to look at his most basic needs.
Of course, there is the mysterious working of God. The journal was unpredictable. “God isn’t working on my time frame, I’m working on his.” As I finish the novel, I have to say I feel like it is imaginative, yet there is that piece of me that says, “all things are possible with God.”
In a few places, there were large portions of Scripture written out. That seemed to detract from the smoothness of the story. I felt that in at least one instance, the Scripture story could have been shared shortly and easily without being long and drawn-out, given that it is a familiar story.
My other little issue is a theological one. I can’t share it without a spoiler, but I will say that many Christians, including me, may be surprised when we get to heaven and find out that things we held tightly to as Biblical absolutes are not. Also, the novel couldn’t happen without this theological difference, and that’s ok.
One quote I will adopt as my own for fun:
“She really needed to get in the habit of waking up before she decided to think.”
Most memorable quote? 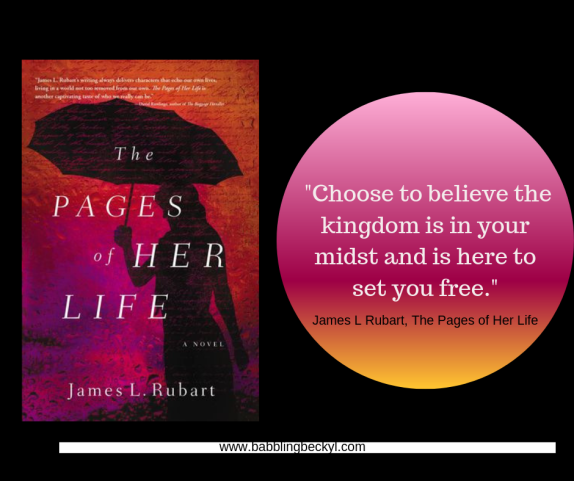 “Choose to believe the kingdom is in your midst and is here to set you free.” The Jews missed this when Jesus came the first time. Allison and Parker have their turns to choose freedom or bondage. Now it is our turn; which will we choose?
“Got it” quote?
“Compared to the ocean, she felt small. Insignificant. And that was a good thing. A reminder that He was God, she was not, and that all along He’d had a plan to rescue her.”
What a great tome to cause the mind’s cogs to start turning! And turning mine are. Pass me another Rubart, please.
References by other readers have been made to a previous book, Rooms. I have not read that and understood The Pages of Her Life well. I feel it stands alone on its own merit.
I received a complimentary copy of this book from the publisher through Celebrate Lit and NetGalley. No positive review was required, and all opinions are my own.

James L. Rubart is a professional marketer and speaker. He is the author of the best-selling novel Rooms as well as Book of Days, The Chair, Soul’s Gate, Memory’s Door, and 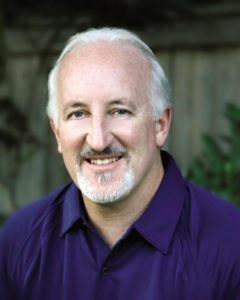 Book Reviews From an Avid Reader, May 21

Spoken from the Heart, May 22

Through the Fire Blogs, May 25

Truth and Grace Homeschool Academy, May 25

Reflections From My Bookshelves, May 30

Inspired by fiction, May 31

For Him and My Family, June 2

For The Love of Books, June 8

To celebrate his tour, James is giving away a finished copy of The Pages of Her Life!!

Be sure to comment on the blog stops for nine extra entries into the giveaway! Click the link below to enter. https://promosimple.com/ps/e4f2/the-pages-of-her-life-celebration-tour-giveaway

Book: The Governess of Penwythe Hall 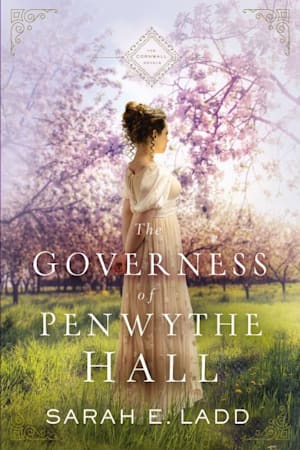 In the first of a new series from beloved Regency romance author, Sarah Ladd, Delia, a governess to five recently orphaned children, would risk anything to protect them . . . even her heart.

Cornwall was in her blood, and Delia feared she’d never escape its hold.

Blamed for her husband’s death, Cordelia Greythorne fled Cornwall and accepted a governess position to begin a new life. Years later her employer’s unexpected death and his last request to watch over his five children force her to reevaluate. She can’t abandon the children now that they’ve lost both parents, but their new guardian lives at the timeworn Penwythe Hall . . . back on the Cornish coast, she tries desperately to forget.

Jac Trethewey is determined to revive Penwythe Hall’s once-flourishing apple orchards, and he’ll stop at nothing to see his struggling estate profitable again. He hasn’t heard from his brother in years, so when his nieces, nephews, and their governess arrive unannounced at Penwythe Hall, he battles both grief of this brother’s death and bewilderment over this sudden responsibility. Jac’s priorities shift as the children take up residence in the ancient halls, but their secretive governess—and the mystery shrouding her past—proves to be a disruption to his carefully laid plans.

Rich with family secrets, lingering danger, and the captivating allure of new love, this first book in the Cornwall Novels series introduces us to the Twethewey family and their search for peace, justice, and love on the Cornish coast.

Timing is everything. Sarah E. Ladd’s Governess of Penwythe Hall has an orchard-setting cover, filled with soft spring colors. This beautiful book with nature’s long-awaited colors of olive, grass green, lilac, rose, and pink releases during blossom time here where fruit trees are abundant. Score for Thomas Nelson publishing.
This was the first novel I had read by Sarah Ladd. Ladd is quite the anglophile and quickly makes the reader want to visit the moors and marshes, or at least the craggy seacoast. I do wish mightily for a map, which may be included in the final copy.
This story had all the ingredients I needed for a very enjoyable tale. A young, attractive governess; a passel of children who depend on her and whom she loves; a rather unwilling, handsome guardian; and enough secondary characters to help steer the tale into interesting and dangerous waters.
Besides Delia and Jac, Jac’s aunt is my favorite character. She is very insightful. She seems to understand Delia’s struggles, she loves the Lord, and she understands the importance of relationships over things or business.
In short, The Governess of Penwythe Hall is a great choice if you are looking for a Regency novel of faith, fear, learning to open one’s heart to others, and facing down the giants from the past that would threaten the future. Delia especially has to figure out which relationships to build and which to cut off and how. 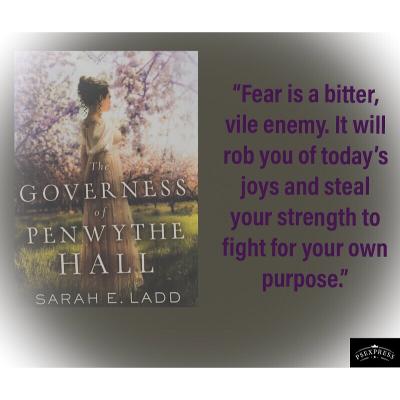 “Sometimes, whether we like it or not, things do not happen the way we think they should.” How true. We must then rise to the occasion in maturity.
“…walls alone do not make children feel safe. People do.”
“People, ah, people. That’s where the real success lies.”
“Fear knew no bounds and came in so many forms…” 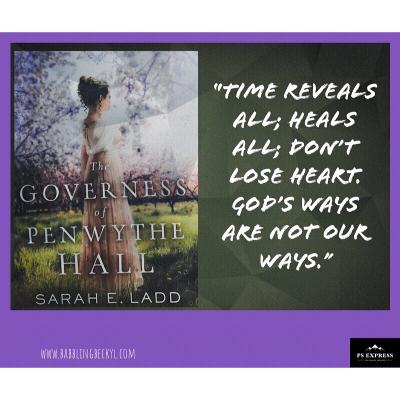 I received a complimentary copy of this book from the author and publisher through Celebrate Lit. This in no way affects my opinions, for which I am solely responsible.

Sarah E. Ladd received the 2011 Genesis Award in historical romance for The Heiress of Winterwood. She is a graduate of Ball State University and has more than ten years of 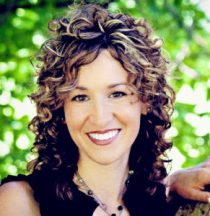 More About The Governess of Penwythe Hall

5 things to know about Cornwall, England:

The Power of Words, April 12

To Everything A Season, April 12

For the Love of Literature, April 13

For HIm and My Family, April 20

Through the Fire Blogs, April 22

The Meanderings of a Bookworm, April 24

To celebrate her tour, Sarah is giving away a grand prize of a finished paperback copy of The Governess of Penwythe  Hall!!

Be sure to comment on the blog stops for nine extra entries into the giveaway! Click the link below to enter. https://promosimple.com/ps/de80/the-governess-of-penwythe-hall-celebration-tour-giveaway